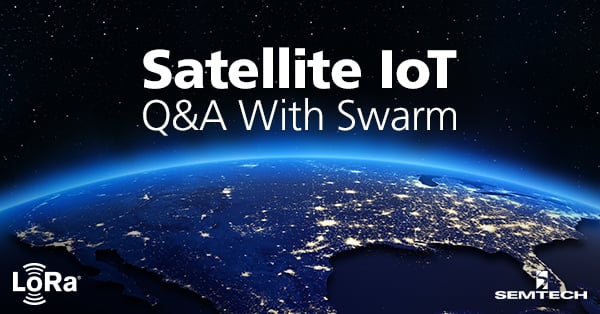 Q. Tell us more about the Swarm and Semtech collaboration.

A. Swarm Technologies recently integrated Semtech’s LoRa® devices into its connectivity solution that enables two-way communications to and from its satellites in Low Earth Orbit (LEO). Swarm incorporates LoRa on Very High Frequency (VHF) frequencies for uplink and downlink to its satellites from the ground. The network is commercially live with 72 commercial satellites.

Q. Why did Swarm select LoRa to incorporate into its satellites?

A. Our primary goal at Swarm has always been to make satellite connectivity more affordable and accessible, two things not usually associated with traditional satellite solutions. We developed small communications satellites – the size of a grilled cheese sandwich – which enables unique economics that allow us to sell our services at the industry’s lowest cost (about 4 to 20 times less expensive than legacy satellite solutions). In order to make this ultra-small satellite design work, we had to move beyond traditional satellite technologies. We have limited amounts of power, both in space and on the ground. We also had a specific link budget we wanted to achieve, as well as a goal of 100% global coverage. LoRa was the best starting point for us to achieve our goals. We developed our own networking protocols to make LoRa suitable for space-based communications and adapted our satellites so they could better send and receive LoRa signals over unusually long distances. LoRa has been a great radio hardware protocol to build into our communications technology to enable us to offer such low-cost satellite connectivity.

Q. What are some of the new applications for businesses and consumers that satellite technology enables?

A. Satellite technology plays a significant role in enabling new applications for businesses and consumers in remote areas where traditional, land-only networks are unavailable or out of reach. Use cases are broad and include everything from smart home technology to smart agriculture, underscoring Semtech’s commitment to enabling a better life.

For example, many farms are located in rural areas where connectivity is a challenge. However, for farmers to take advantage of technology aimed at making their operations more efficient, they need access to connectivity. Satellite services are emerging as a suitable alternative that help make access to high quality foods more affordable for citizens across the globe. Another example is in cities and villages across the globe where access to broadband services is limited. Satellites, once again, are proving useful as a way for these communities to take advantage of the IoT through applications like smart lighting or waste removal.

Swarm plans to deploy a total 150 commercial satellites by the end of 2021, which are expected to bring latency times down to less than one minute. The user modems, which are integrated into IoT devices, communicate with the satellites, enabling reliable data transfer across the globe. Semtech believes that the power of the IoT and its ability to make a better life can be witnessed by users regardless of their geography or climate. Satellite connectivity is a key driver in delivering that access – to even the most remote areas of the globe. We are committed to its success.

Q. What are the near- and longer-term benefits of satellite connectivity?

A. There is already a huge demand for low-cost global connectivity for IoT devices across many industries. 75 billion IoT devices are expected to come online by 2025 according to Statista, many of them in rural or remote locations that lack reliable or affordable existing connectivity solutions. Satellite networks enable these devices to operate around the world. This can help to create more efficient supply chains, reduce crop spoilage, monitor water access, support vaccine distribution, and more.

Looking to the future, the benefits of global connectivity and information sharing are too numerous to name. It will impact health, safety, education, health care, commerce, finance, and so much more. In many parts of the world, terrestrial networks are too expensive or difficult to deploy, so that’s where space-based networks can come into play. Once the cost of satellite connectivity comes down, an endless number of new use cases will emerge. Satellite networks will play a role in everything from self-driving cars to personal communications.

Semtech, LoRa and the LoRa logo are registered trademarks or service marks of Semtech Corporation or its affiliates.

Co-founder and CTO of Swarm