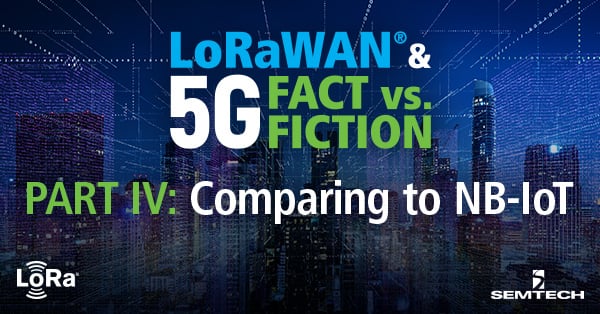 This is the fourth blog in an ongoing series about the LoRaWAN® protocol, and its capabilities to transform next-generation networking applications built on 5G. This blog series follows Semtech’s “5G Fact vs. Fiction, and How LoRaWAN Plays a Role” webinar, featuring Charter Communications, MultiTech and Orange, and moderated by Beecham Research. It will address some of the pressing topics offered by the audience during the webinar’s Q&A. Read the introduction to the new series in part one, explore large scale LoRaWAN networks in part two – featuring MultiTech, and insights from Orange in part three.

In part four below, Rémi Lorrain, Director of LoRaWAN Networks for Semtech, explores key differences between LoRaWAN and NB-IoT.

Could you elaborate on the energy consumption gap between LoRaWAN and NB-IoT?

We regularly see studies comparing NB-IoT and LoRaWAN from the energy consumption perspective. Making a comprehensive analysis on this topic is challenging as “energy consumption” is use case related and relies upon tens of parameters like application design (end device communication schemes and mobility profile), hardware and software design (electronics components) and network roll-out strategy (3GPP specification releases and activated services).

The LoRaWAN protocol was specifically designed for massive IoT use cases optimizing battery life of battery powered sensors. Alternatively, 4G was built for broadband and critical IoT applications and optimizes a scarce and expensive spectrum that is based on a permanent end device control by the network. I will not go through a detailed gap analysis for each use case, but simply highlight the 10 reasons illustrating the NB-IoT challenge to meet low energy consumption performances. It will become obvious that the energy consumption performance comparison needs to go beyond a ‘chip-to-chip’ technical comparison.

NB-IoT spectrum covers more than 20 frequency bands and over 10 are recommended for worldwide roaming, from 700MHz up to more than 2GHz. There is a power loss issue when designing a device antenna and radio front end using multiple frequency bands, where the LoRaWAN protocol is all contained between 450MHz and 923MHz, leading to optimized antenna design limiting power loss. A solution for NB-IoT end devices is to cover a limited set of frequency channels, with the consequence to reduce roaming capabilities.

On the one hand, most NB-IoT end devices are operated between 20dBm and 23dBm output power, showing a peak current of more than 100mA. On the other hand, most Semtech chips (LoRa® modulation) have an output power at +14dBm, and some (SX1262) go up to 20dBm. Semtech chips typically reach a 40mA maximum output peak current. Thus, for NB-IoT end devices, the impact is an increased cost of ownership (bigger form factor and higher capacity battery) as well as a shorter battery lifetime.

Most Cellular operators have a large 2G M2M end devices base, leading to embed 2G and NB-IoT on the same module. A multi-standard implementation brings the necessity to design end devices with higher performance CPU, and higher memory capacity (multiple stacks to be stored), thus more energy consumption.

On the one hand, 4G relies on OFDM advanced (complex) modulation for downlink communications; therefore, NB-IoT end devices must be able to demodulate complex OFDM signals requiring higher performance electronic components, leading to higher energy consumption. On the other hand, the LoRa physical radio layer and LoRaWAN protocol enable end devices design relying on cost efficient and lower power electronic components. Due to certification complexity and cost, the only reasonable path to integrate NB-IoT connectivity in an end device is to use an NB-IoT module, which is optimized for some use cases. The module firmware cannot be changed (without voiding the certification of the module), preventing optimization for given use cases. The simplicity of LoRaWAN network connectivity allows the device manufacturer to directly integrate at the chip level without using a module. The LoRaWAN protocol stack is open source and can be integrated by any market player.

Adding to complexity, 3GPP has been releasing multiple versions of 4G specification and this pace will not change (one new release every 18 months). It brings the necessity for the ecosystem to manufacture a very large set of module configurations keeping the backward compatibility, leading to reduce scale and energy performance benefits whereas the LoRaWAN protocol is focused on a very few number of configurations.

LTE is a stateful protocol where the end device is constantly connected to the network, generating overhead and frequent both-way communications, with a direct impact on battery lifetime. This sets a power consumption floor for the end devices, even when it has no application data to transmit. In contrast, the LoRaWAN protocol is a non-connected standard (ALOHA) where end devices only wake up and communicate when necessary.

As a complex protocol, LTE multiplies high energy consumption device states for cell handover (it is an issue for moving devices), keep alive, or security processes, reducing battery lifetime where the LoRaWAN protocol limits communication to a very few number of MAC (Media Access Control) commands with a limited set of information shared with the network.

NB-IoT does not implement uplink macro diversity (end device frames received by multiple gateways). NB-IoT end devices are managed by one dedicated cell that can stand far away from the end devices, leading to increase emitting power and consume more energy. A LoRaWAN network implements macro diversity by design where any gateway can receive a device frame and become the serving gateway, increasing the occurrence of gateways close to end devices, thus reducing battery consumption.

Network densification has a positive effect on end device energy consumption as end devices move closer to serving gateways. Based on power control feature, end devices can reduce their emitting power, thus reducing energy consumption. Densifying a LoRaWAN network is lower cost by two or more orders of magnitude compared to LTE network expansion. Moreover, the easy collaboration between private and public LoRaWAN networks is a driver for network cost optimization through roaming.

To summarize, the energy consumption gap between LoRaWAN networks and NB-IoT is far more than just comparing LoRa chip and NB-IoT module energy performances. It turns out to compare end to end architectures and roll-out options. We see that NB-IoT is going to face 10 challenges to reach energy consumption performances equivalent to LoRaWAN networks. The focus of 3GPPP is today on the development of the new 5G broadband ecosystem and 3GPP innovation cycle (5-10 years) might also be a challenge for NB-IoT ecosystem to significantly improve.

I would like to end this post on a more holistic view. Today, it has become obvious that no IoT technology can cover the large diversity of IoT use cases. We see the market shifting to the multi-Radio Access Network (Multi-RAN) strategy, as explored in the recent white paper combining Wi-Fi and LoRaWAN published by the LoRa Alliance® and Wireless Broadband Alliance (WBA). Moreover, multiple private companies and operators deploy both Cellular IoT and LoRaWAN networks, combining the strengths of both standards, with LoRaWAN networks fitting massive IoT requirements (very low power consumption, cost effective roll-out, flexible business models, and simplicity) where Cellular IoT (4G, 5G) for critical IoT use cases or broadband applications.